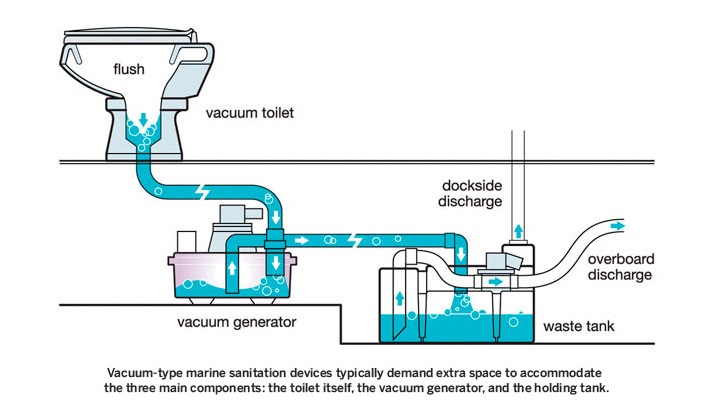 How The VacuFlush System Operates:

VacuFlush systems operate with your existing fresh water and uses only about a pint per flush, much less than other systems. While cutting down on calcification in your lines from raw water, using freshwater also eliminates the mal odors created by dead and dying organisms in your line. Less water during the flush cycle in a VacuFlush system allows for up to four times more holding tank capacity than other types of systems.

The vacuum system evacuates the bowl instantly,  the waste is moved through the vacuum pump at 7 feet per second. low power consumption from 3 - 7 amps.
1. Vacuum is maintained in the system at all times. If needed the water level in the bowl can be raised by simply lifting the flush lever.

2. When the toilet is flushed by pushing down on the foot lever, the vacuum energy stored in the system is released. The loss of pressure in the vacuum tank causes the integral pressure switch to activate the vacuum pump. The bowl is instantly cleared and the waste is moved through the vacuum pump at 7 feet per second.

3. After the flush lever is released, the vacuum pump continues to run until the vacuum level is recharged in the system. Recharging the vacuum takes about one minute, depending on how long your run is.
A VacuFlush system can help the resale value of your Boat

There are no products listed under this category.